Review corner 2015
In the last fifty years Danish music has undergone a considerable change, its major composers rejecting the present reactionary ideas that turn back the musical clock. Atonality derived from the Second Viennese School is their starting point, this disc’s journey beginning in 1993 with Svend Hvidtfelt Nielsen’s Divertimento.Commissioned as fanfare for an official occasion at Egeskov Castle, Nielsen relates that he is not very good at composing jubilant music, and left that moment for the work’s short finale. At least the three movements that go before are so introverted, with long periods of silence when you check your equipment is still working, that any type of finale was bound to sound joyous by comparison. Six years later Ib Nørholm’s Third Piano Trio,‘Essai in memoriam’, was composed “in memory of music as such”. In that he has been singularly successful, the score meandering through atonality and all it stands for, the busy finale ending in mid-air with the question, ‘where do we go from here?’. Pelle Gudmundsen-Holmgreen’s Moments musicaux might have the answer in a jigsaw of styles and sounds moving through various emotions from Talking, Shouting to Humming, Whispering. Maybe the composer is attracted to Minimalism, or maybe just toying with tonality, but he certainly uses other people’s music to fill out his score. Like a Cube of Silence is a quotation from a novel Lars Hegaard had read, its five short sections both active and attractive. Finally we reach 2011 with Jesper Koch’s cleverly crafted Piano Trio in three movements—Symmetries, Reflections and Contrasts—where he divides his influences between yesterday and today’s musical world. Dedicated to Trio Ismena, the young group who have rapidly found a place among today’s outstanding chamber groups, and here show a dedication and affinity to modern Danish music.
David Denton 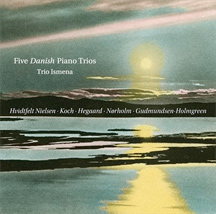